July 1875: Campers from Santa Cruz at grove across river.

July 16, 1875: Santa Cruz Local Item “In Camp At Felton”: On Wednesday a party consisting of Mr. and Mrs. H. M. Terry, Mr. and Mrs. Henry Chace and children, Mr. and Mrs. Thomas Moore, Mrs. T. J. Weeks and child, Mrs. Henderson, Miss Julia Chace, Miss Fanny Bailey, Mrs. I. Vestal, Miss Flora Besse, Mr. Wm. Avas, Mr. Fred Moore, and Mr. Aleck Bailey, pitched their tents at the Picnic Grounds near Felton. Two years ago the public spirited people in Felton fitted up these grounds with a nice large platform for speaking, dancing, etc. , built 3 long tables and arranged the place for celebrations, picnics and parties. Water and wood are convenient, and the campers pleasantly located, and for the past week, camp life has been enjoyed to its fullest. Visitors from Santa Cruz and Felton came daily and on Sunday some 30 persons from Santa Cruz visited the camp and partook of a genuine camp dinner. All were welcome and good feeling prevailed throughout the camp. Monday night a dance was given and a general invitation was extended to all. The people of Felton responded in their usual hearty manner and attended in large numbers. When the ITEM reporter arrived a pleasing and picturesque scene was presented. A huge camp-fire sending up its bright flames illuminated the grounds, above which was suspended in evergreen on a white background, the word “Welcome”. Around the fire were gathered the campers and guests in every attitude of comfort. The platform, lighted by candles, and the three white tents adjoining standing boldly out against the black background of the woods, added much to the novel spectacle. At nine o’clock the first dance was called, and soon the woods resounded with the sound of music, the hum of voices, and peals of merry laughter. With little intermission dancing was continued until 1 o’clock. In the meantime, no regular supper having been prepared, the dancers, as they wearied, refreshed themselves with hot coffee and a cold lunch. Over one hundred persons were present, and all expressed themselves well pleased. The music was furnished by Felton musicians. Among those present who came from Santa Cruz were Judge S.S. Holl, Mrs. J. T. Griffith, and Miss C. L. Ray of Sacramento; Miss Pearl McCann, Ed Heacock, Horace Heacock, George Fox, C.F. Kittridge, Underwood McCann and J. Heacock. The names of only a portion of those present from Felton could be obtained, but among them were Mr. and Mrs. Jas Cormack, Mr. and Mrs. H. W. McKoy, Mr. and Mrs. J.F. Cunningham, Mr. and Mrs. David Kent, Mr. and Mrs. Capt Staples, Mr. and Mrs. Talbot, Mr. and Mrs, Hubbard, Mr. and Mrs. A. Frazier, Mr. and Mrs. J. Hayes, Miss Glynn, the Misses Welch, Miss Risper Bennett, John Mahanna, John Hagar, A. Stark, J. Welch, H. Welch, F. Staples, C. White and others. Tuesday the campers returned to Santa Cruz, and expressed themselves as under obligations to the people of Felton for favors and courtesies shown them during their entire day in camp. 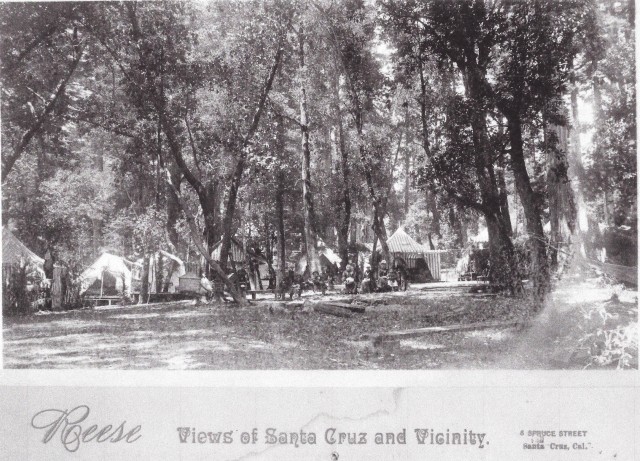 1800’s Campground in Santa Cruz County. Could be Felton Grove.